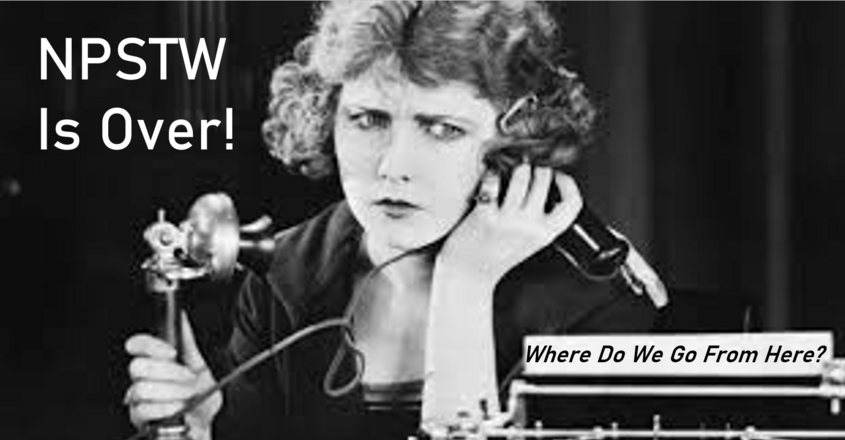 The banners come down. The proclamations stop. The vestiges of the last free meal fade forlornly in the recesses of the break room fridge, kept company only by the mystery container of Tupperware whose contents are too questionable even to be stolen. Eventually most of the trinkets, stress balls, and keychains find their way to the drawer of despair where they live out their days amongst unused ketchup packets, dried up pens, a coffee stained copy of a directive from 2008, and a part to something that still might be in service so had better not be thrown away.

Typically, at the end of NPSTW, I post a message reminding everyone that our professionals do good deeds 52 weeks a year, not just one. But this time, things are a little different. The battle is more real. There are casualties. Some of us are sick. Others have died. The rest are mainly overworked and occasionally afraid. Not that there is ever a good time for a pandemic, but COVID-19 interrupted the progress of many toward passing legislation to declare telecommunicators as first responders. While the actions of public safety personnel across the board have been nothing less than stellar these past few weeks, we now have grocery clerks declaring themselves as belonging in this category, as well. Although this logic is flawed, they will proudly point out that they have maintained physical contact with the general public throughout, while we have not. And like it or not, a lot more people see the cashier at Walmart than see you. Of course, as soon as the first pitch is thrown, basket shot, or field goal kicked, the comparable worth argument for anyone who saved society will go out the window, because the focus will once again return to entertainment and not survival.

All this begs the question, what is it that we really want? Years ago, someone coined the term telecommunicator, because we weren’t “just” dispatchers. When questioned by a local reporter about the need for the new designation, I asked if she preferred to be called a reporter or a journalist. She got the point, but in retrospect it was moot. Fancy words don’t mean much. I’ve heard people called “just a telecommunicator” many times since then. This minimalization simply takes a lot longer to say and is significantly harder to spell. Now we’re all about replacing PSAP with ECC. Forget about the words. Change the perception.

Look closely at some arguments for inclusion of police, fire and EMS dispatchers in the Labor Department’s protective services category. I’ve often heard it said that “telecommunicators need to be reclassified because even crossing guards are included in that grouping.” Let that sink in. Crossing guards? What has the protective services classification done for them? Are they well paid? Do they have world-class benefits? Can they retire at age 55? No. No. And hell no. But proper placement is only one of many issues. Wouldn’t we rather have all three of these perks than what boils down to an honorary degree?

So, why is it so important to us to be known as first responders? For starters, some still mistakenly believe that the title alone bestows the keys to the magical kingdom. In states and localities where reclassification legislation has passed, folks have often found out the truth the hard way. It’s a complex issue, requiring a lot more than hashtags or memes to properly explore. For others, it’s being part of a team, or assuming that association with fire, police, and EMS field personnel will help the public to understand and appreciate what we do. Unfortunately, until there is a major screw-up, some of the citizens we serve don’t even know we exist. When they call 9-1-1 they mistakenly believe they are either talking to a cop, or to the people who are going to respond. That misconception needs to change, and we need to change it.

To me, the term first first responder is one of the more accurate descriptors of our profession because it distances us from the pack, while pointing out that without our help nothing much happens. As a director, one of my more compelling arguments come budget time was that every dollar spent on emergency response resources was wasted unless communications was adequately funded. We are the gateway. We are the bridge between the public and public safety.

In many of my classes I’ve gotten strong feedback concerning NG911 from TCs who did not want to view attached images and videos of emergencies. “If I wanted to see that stuff, I’d have become a firefighter,” is a common complaint. Those sentiments provide ammunition for those who believe that the term first responder does not apply to us. Having worked both sides of the microphone, I can tell you that there is stress on each. I can also honestly say that the memories still with me come more from riding a rig than the console; things I’ve seen and felt and smelled, rather than only heard. There is also no debating that the element of physical danger is not normally present in the ECC. So, yes, Virginia, there is a difference.

While I was happy to hear that some centers were providing special pay for working this pandemic, even this may come back to haunt us. Serving during emergencies is exactly what we DID sign up for, and some citizens are already questioning such policies. There are a lot of Karens out there, and some of them even manage budgets. If we were properly compensated to begin with, maybe this wouldn’t need to happen. But does the public comprehend? If they don’t, why not?

Because for a group that has the term communicator proudly imbedded in our titles, we suck at communicating. And as a society we suck even worse at comparisons. I’ve seen more analogy focused memes that left me scratching my head than I’ve seen days on this earth, and that’s a lot. If my math is right, this number’s pushing 25,000. I’m old. I’m crabby. I’m a dinosaur. And if I have any regret it’s that I didn’t leave a better legacy. I’ve had my fifty years. Now it’s your turn. Don’t screw it up.

Last week I asked for stories to share on a worldwide website about how the Coronavirus was affecting our profession, and offered anonymity for those concerned about any perceived repercussions. It was a golden opportunity to showcase the humanity of this crisis. I received one very heartfelt response from my posting in multiple groups. Only one. Yet bitch about a boss, co-worker, policy, schedule, piece of equipment or crazy caller and enough information springs forth to recreate the event involved in Wikipedia-like detail. That energy, passion, and involvement is misspent. It needs to be focused like a laser on defining who we are and what we need in a manner that every citizen and every politician can understand without question. No, we are not secretaries. But we are also not firefighters. We are not police officers. We are not EMTs. What we are is something different. What we are is something more. Like Liam Neesom, we have a very particular set of skills. Skills that we have acquired over very long careers, and we should not for one second act apologetical about this. But we must also begin this enlightenment at home. No one treats us more like second-hand citizens than those within our own ranks who thrive on chaos, gossip, and bullying our young. The drama seen at many centers makes Tiger King seem dry, tame and boring. Fix it!

At a time when our nation is divided about so many issues, we must find the strength to once and for all pull together. We must unite. We must recruit allies. And we must demand that our professional organizations work together seamlessly to help make real changes for the future. Changes that include adequate salaries, benefits, and minimum staffing requirements that are statutorily enforceable. One thing I have learned during my half-century of service is that the more severe the crisis, the more telecommunicators rise up to the task. So, now that the celebratory week is over, rise up. Be proud of who we are. Be proud of who you are.  Because Next Generation 9-1-1 is not equipment alone. The Next Generation of 9-1-1 is you.